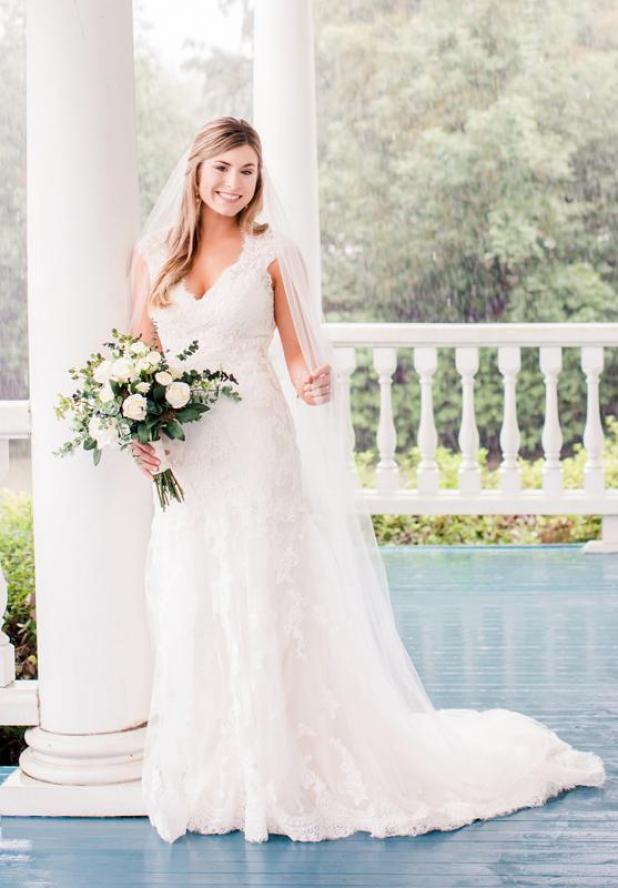 Jillian Faye Boone of Iota and Kevin Frem Frank Jr. of Roberts Cove were joined in holy matrimony at St. Joseph Catholic Church in Iota on the evening of Friday, Nov. 17.
Rev. Msgr. Keith DeRouen celebrated the 6:30 p.m. Nuptial Mass.
The bride is the daughter of Kyle and Jody Boone of Iota. Her maternal grandparents are Fred and Jan Cart of Iota and the late Phyllis Cart, and her paternal grandparents are Kenneth and Carolyn Boone of Westlake.
Jillian is a 2015 graduate of Iota High School and is presently studying early childhood education at the University of Louisiana at Lafayette.
The groom is the son of Kevin and Kate Frank Sr. of Roberts Cove. His grandparents are Mrs. Garry Aycock of Roberts Cove and the late Dr. and Mrs. Jack Frank of Crowley.
Kevin is a 2014 graduate of Notre Dame High School of Acadia Parish and is currently a mechanical engineering student at the University of Louisiana at Lafayette.
Given in marriage by her father, the bride was beautiful in a dreamy lace and tulle Maggie Sottero gown. The ivory wedding dress featured a separate champagne slip gown of Vogue satin, a V-neckline and delicate cap sleeves. The gown was finished with an elegant keyhole back and a row of satin-covered buttons.
The bride paired her gown with a cathedral length tulle veil and carried a bouquet of cream roses and an abundance of greenery that included eucalyptus, olive branches and green hypericum berries. Entwined in the bouquet was a rosary given to the bride by her mother, who had it made from rose petals saved from the bride’s engagement day.
In keeping with tradition, the bride wore a ruby hatchet pin worn by five prior generations of brides on her mother’s side of the family as “something old,” while her wedding dress served as “something new.” An angel pin given to her mother after her grandmother’s death was “something borrowed,” and the soles of her shoes were “something blue.”
Caitlin Boone, sister of the bride, served as maid of honor.
Bridesmaids were Morgan Boone and Madelyn Boone, sisters of the bride; Jane Fluitt and Emma Frank, sisters of the groom; Ella Frank, sister and Godchild of the groom; and Kassidy Guidry, Victoria Andrus, Vivian Stutes and Mallory Faul, friends of the bride.
The brideal attendants wore sleeveless full length taupe gowns featuring V-necklines and swooping cowl backs and carried smaller versions of the bride’s bouquet.
Elizah Boone, niece and Godchild of the bride, served as flower girl. She was escorted by Luke Fluitt, nephew and Godchild of the groom, and Michael Fluitt, nephew of the groom.
David Frank, brother of the groom, served as best man.
Standing as groomsmen were Jack Frank, Joseph Frank and Matthew Frank, brothers of the groom; Patrick Hundley, Jeff Michael Daigle, Hogan Guidry and Alexander Rozas, friends of the groom; Brennan Boone, brother of the bride; and William Frank, cousin of the groom.
Rankin Bihm, Brennan Corzine, John Bryant Gielen, Christian Hundley and Jack Wagar, friends of the groom, and John Thomas Frank, cousin of the groom, served as ushers.
For her daughter’s wedding day, the mother of the bride, the former Jody Cart, selected a taupe floor length Tadashi Shoji lace gown featuring an ivory lace bodice overlay.
The mother of the groom, the former Kathleen O’Meara, chose a Jessica Howard tea length gown featuring three quarter length sleeves, a lace bodice and a shantung skirt.
Both mothers carried small hand-held bouquets similar to that of the bride.
Music for the ceremony was provided by soloist Vanessa Benoit, violinist Thomas Benoit and pianist Barbara Marshall.
Selected scriptures were read by Megan Cart Chachere, aunt and Godmother of the bride, and Elizabeth Moody Gielen, a dear friend to the Frank family.
Offertory gifts were presented by Ashley Cart LaCombe, aunt and Godmother of the bride; Keith Boone, uncle and Godfather of the bride; and Theodore Frank, uncle and Godfather of the groom.
Following the nuptials, family and friends joined the newlywed couple for a beautiful candlelit reception at Point-aux-Loups Springs Ballroom in Iota.
The bride’s three-tiered traditional ivory wedding cake was topped with flowers matching those of the wedding, and the groom’s square cake was decorated in navy with and topped with his initials.
Out-of-town guests traveled from Las Vegas, Nevada; Atlanta, Georgia; Miami, Florida; Houston, Texas; and Spokane, Washington.
On Saturday, Nov. 11, the parents of the groom hosted a 6 p.m. rehearsal dinner at Mo’ Crawfish restaurant. Guests enjoyed homemade crawfish étouffée, green beans and Caesar salad, along with rolls.
Following a wedding trip to Disney World, the couple will reside in Rayne.