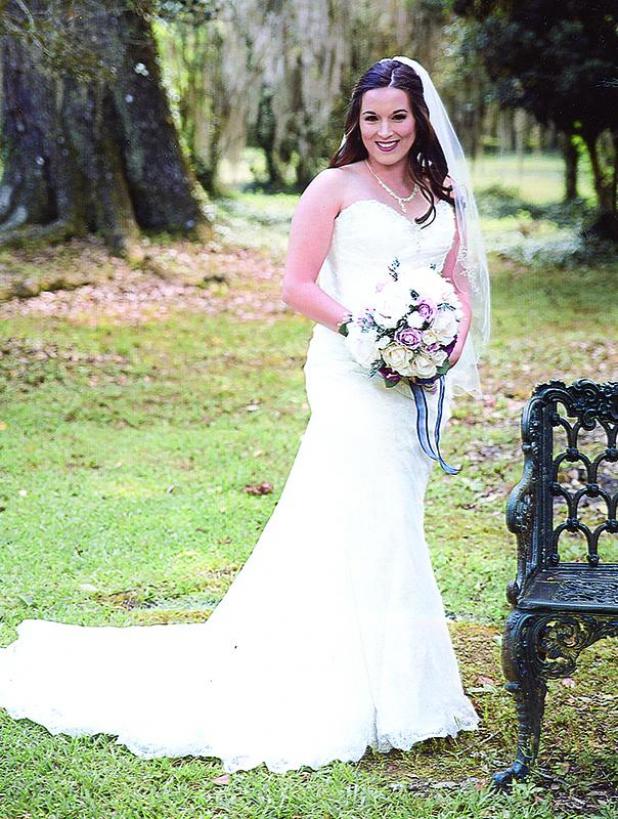 Kelsey Marie Richard and Adam Joseph Doucet, both of Crowley, were joined in holy matrimony at St. Joseph Catholic Church in Rayne on Saturday, Nov. 17, 2018.
Fr. Kevin Bordelon celebrated the 6:30 p.m. Nuptial Mass.
The bride is the daughter of Dena Borne Richard of Crowley and Patrick Richard, also of Crowley. She is the granddaughter of Ida and James “Jimmy” Borne of Rayne and Betty and Newjay Richard of Crowley.
Kelsey is a 2011 graduate of Crowley High School and a 2017 graduate of McNeese State University, where she earned a Bachelor of Science degree in accounting. She is presently employed at the Certified Public Accounting corporation of Darnall, Sikes and Frederick, where she will soon begin working on obtaining her CPA license.
The groom is the son of Christina and Horace Doucet Jr. of Crowley. His maternal grandparents are Shirley Hebert of Crowley and the late George Hebert, and his paternal grandparents are Carol and Horace Doucet Sr. of Crowley and the late Judy Doucet.
Adam graduated from Crowley High School in 2003 before attending the University of Louisiana at Lafayette, where he majored in secondary education. He is currently employed with Knight Oil Tools as a lead operator for the Tri*Drill Division.
The bride, given in marriage by her father, wore an elegant A-line Roslin gown by Sophia Tolli. Slimming side-draped lace was both angelic and sensual, and delicate hand-beading highlighted the strapless sweetheart neckline, while a matching beaded brooch adorned the side hip. The back of the dress featured a corset closure and was finished with a sweep train. For her headpiece, the bride selected an ivory veil embellished with white and ivory embroidery and accented with silver beading and pearls.
Kelsey carried a hand-tied bouquet of ivory roses accented with mauve and dark purple roses. Her grandmother’s rosary was entwined in the bouquet, and the stems were wrapped in mauve ribbon and white pearls with a navy blue bow.
The rosary in the bride’s bouquet served as the first of her traditional items, “something old,” while her veil and wedding dress served as “something new.” The ring bearer’s pillow was “something borrowed,” and the bride’s garter was “something blue.”
Megan Richard, cousin of the bride, served as matron of honor, while Katelyn Richard, sister of the bride, served as maid of honor. Kameryn Richard, sister of the bride, Shelbie Touchet and Lacey Colligan, friends of the bride, and Jessica Dugas, cousin of the bride, served as bridesmaids.
The bridesmaids wore floor length gowns in a quartz/mauve hue. The sleeveless bodices featured ultra-feminine corded lace with illusion sweetheart necklines and illusion V-backs. The long mesh skirts with front slits flowed from elegantly ruched waists.
They carried bouquets of mauve and dark purple roses accented with ivory roses with the stems wrapped in mauve ribbons with navy blue bows.
The duties of best man were fulfilled by Joshua Doucet, brother of the groom. Serving as groomsmen were Trevor Doucet, son of the groom; Joseph Thomas and Tyson Quibodeaux II, friends of the groom; and Jacob Doucet and Matthew Doucet, brothers of the groom. Parker Miller, son of the groom, served as junior groomsman.
Mazilyne Harrington, daughter of the bride, served as flower girl. She was beautiful in a long ivory gown featuring a sleeveless, pearl-embellished satin bodice and a cascading mesh horsehair skirt. The fit and flare dress was defined at the natural waist by a sash embellished with pearl and rhinestone beadwork on the front and tied into a bow on the back. She carried a lace and satin basket with a bouquet inside that matched her mother’s.
Saige Harrington, son of the bride, served as ring bearer.
For her daughter’s wedding, the mother of the bride, the former Dena Marie Borne, wore a long champagne-colored lace dress embellished with sparkling sequins and completed with a matching jacket.
The mother of the groom, the former Christina Ann Hebert, chose a long blue-gray gown that featured a sleeveless lace top, an accent belt and a flowing knit skirt, along with a matching lace jacket.
Both mothers wore ivory and mauve corsages.
Guests were seated by ushers Joshua Touchet, Belvin Petre, Jordan Richardson and Kendale Turner, all friends of the couple.
Music for the ceremony was performed by Kurt Boudreaux.
Selected scriptures were read by Charlene Hebert, godmother of the bride, and Debbie Marceaux, godmother of the groom.
Ansley Boudreaux and Clay Boudreaux, cousins of the bride, presented offertory gifts.
Following the wedding, family and friends joined the newlywed couple for a reception at the International Rice Festival Building in Crowley.
The guest tables were covered with white cloths with rose petals sprinkled on navy blue runners. The main centerpieces had assortments of flowers in mercury glass vases with two floating candles in vases on the ends.
Accented with ivory and mauve roses and greenery, the bride’s cake was a four-tiered classic white confection with ivory buttercream frosting and assorted fillings including Bavarian cream and strawberry. It was served by Melissa Borne Dugas, godmother of the bride.
The groom’s chocolate cake was two tiers, one with a chocolate filling and one with a strawberry filling, with an LSU tiger’s eye on the bottom tier and a duck hunting scene on the top tier. It was served by the groom’s godmother, Debbie Marceaux.
Out-of-town guests at the wedding traveled from Florida, Tennessee, Texas and various points throughout Louisiana.
On the Thursday evening prior to the wedding, Janet Guidry, aunt of the bride, and Michael Spallino hosted a 7 p.m. rehearsal dinner at Guidry’s home. Guests enjoyed chicken and sausage gumbo and trimmings. Following a wedding trip to New York City, New York, and Boston, Massachusetts, the couple will reside in Rayne.