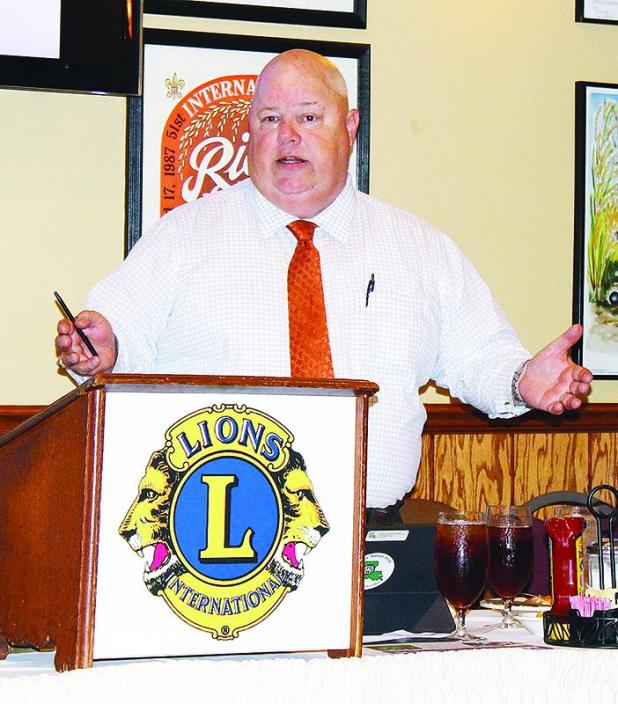 THE POST-SIGNAL / Steve Bandy
Dr. Mike Strain, DVM, state Commissioner of Agriculture and Forestry, spoke recently to members of the Crowley Lions Club about the importance of agriculture to the area, the parish and the state.

Dr. Mike Strain, DVM, recently re-elected to his fourth term as state Commissioner of Agriculture and Forestry, covered a wide range of topics when he addressed the Crowley Lions Club recently.
Everything from the recent cyber attack on the state computer system to a new rice deal with Korea to the grown hemp industry were covered during the lunch meeting at Rice Palace.
“Our world tilted up on its ear Monday,” Strain said, referring to the cyber attack that impacted 132 state computer servers and 1,600 work stations.
“Fortunately, we were able to unplug and shut down before too much damage was done,” he said. “But still, 1,600 computers have to be wiped down to the metal and reprogrammed.
“Technology is changing the way we do business.”
Strain also announced to Lions a long-sought deal had been reached between the United Stated and Korea for U.S.-only rice import access.
“The agreement ensures that Korea will import a minimum of 132 metric tons of rice annually, beginning January 1, 2020,” he said.
While the U.S. has regularly exceeded that tonnage in export since 2014, this additional certainty allows for long-term planning and regularity by American exporters doing business in the Korean market, Strain explained.
Korea is consistently a top ten export destination for U.S.-grown rice and one of the best and highest-valued markets for farmers, merchants and millers.
The commissioner said hemp is becoming big business in agriculture circles thanks to recent action by the Louisiana Legislature to legalize the growth of hemp and allow the sale of some CBD products.
“There was a meeting recently in Alexandria — a big meeting, about 500 people attended — to find out about the potential of growing industrial hemp as a cash crop,” Said Strain.
He explained that hemp has several uses. It can be grown for CBD oil that has therapeutic applications for inflammation and anxiety. The crop also can be grown for seed to be used as food for animal and human consumption.
Hemp is also grown for fiber to make a wide variety of products, including rope and industrial products, he he said.
“Hemp comes from the same species of plant — Cannabis Sativa — as marijuana,” Strain explained. “Unlike marijuana, however, hemp does not have enough THC to get users high.”
Currently, hemp must be tested for its THC content, but the amount of THC in the cannabidiol, or CBD, is insufficient to induce a high.
“By federal law, hemp that exceeds 0.3 percent CBD in THC is considered marijuana and cannot be harvested,” said Strain. “If it tests 0.3 percent or higher, it must be destroyed.”
The commissioner also touched on a number of other bills passed by the Legislature with the backing of the Agriculture Department.
“The Louisiana Labeling Law is an important one,” he said. “Most of us know when we go to the store and see ‘Almond Milk’ or ‘Cauliflower Rice’ that we’re not really buying milk or rice. Unfortunately, a lot of younger shoppers don’t know the difference,” he said.
Strain said this was a surprisingly difficult bill to get through the Legislature.
“We were having all kinds of trouble until someone mentioned ‘plant shrimp.’ Then, all of a sudden it was, ‘What?!? We can’t have that!’”
He said the law is aimed at protecting the brand that farmers have established.
Insurance costs are something that must be addressed because the cost of trucking produce is becoming prohibitive, according to Strain.
“We’ve got to get a handle on it,” he said. “We did it with medical malpractice. We did it with workers’ comp. We must do it with agriculture. Something’s got to give.”
Looking to the future, Strain was cautiously optimistic, pointing out that the number of farmers nationwide continued to shrink while the demand for food continues to increase.
“We’re going to have to double our food production in the next 30 years,” he said.