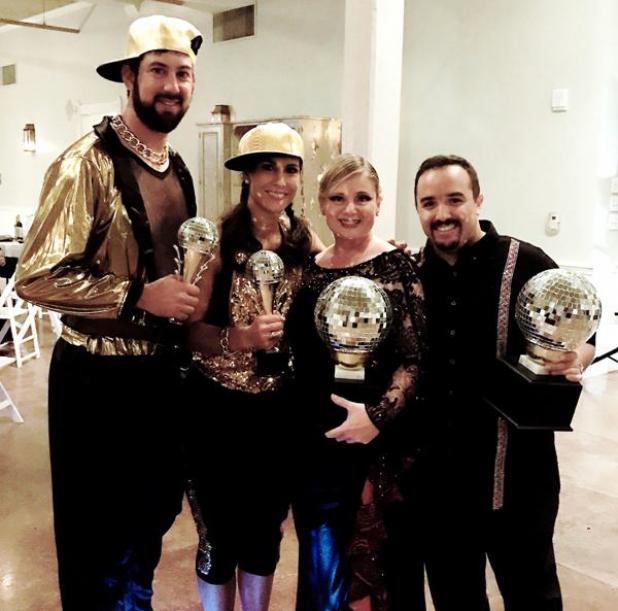 From left, chosen as fan favorites of Dancing With the Stars 2016 were Patrick Hensgens and Gina Trisler. Meanwhile, Angelique Credeur and Danny delaNuez were crowned the winners of this year’s fundraising and dancing competition.

Another successful twirl on the dance floor for DWTS

After two nights of dancing, it was safe to say, the cast of Dancing With the Stars in Crowley were ready for a break.

Months of rehearsals, costume fittings and more all while fundraising for the Rotary Club of Crowley and the Community Outreach Corporation saw its culmination last week with the grand finale performances and the eventual announcement of Angelique Credeur and Danny delaNuez as this year’s champions.

Choreographer for the duo was Leanne Mooney.

Also announced was the Fan Favorite performers. That recognition went to Gina Trisler and Patrick Hensgens and their choreographer Mariah Hebert.

Wednesday and Thursday night proved to be fun-filled evenings for those who attended and the entire fundraiser has once again been a success for the entities involved.

“Dancing With the Stars 2016 was a great success,” said Mary Zaunbrecher, one of several co-chairs of the event. “It is heartwarming to see Acadiana, as always, come out to support the community.

“The Rotary Club of Crowley and the Community Outreach Corporation want to thank each and everyone one of our dancers, judges and emcees for their time and commitment to such a great cause.”

In total, the event raised well over $75,000 through sponsorships, votes, ticket sales and a silent auction, among other things, though the exact amount was still being calculated Monday morning.

Sharing in chairing duties with Zaunbrecher this year were Suzy Webb, Jennifer Trahan and Susan Comeaux. Brenda Core served as the choreography chair.

This year, 20 people, forming 10 couples, took the stage as part of Dancing With the Stars. With their choreographers, the couples danced hip-hop and classical numbers to keep spectators entertained throughout the nights’ performances. For comedic relief, the “judges” offered advice and critiques of each couple’s numbers each night as well.

There was also the added surprise fun with dancers from the 2013 and 2014 incarnations of Dancing With the Stars returning to the stage once more for a special alumni opening dance number. Linda Craton served as the alumni dance choreographer.