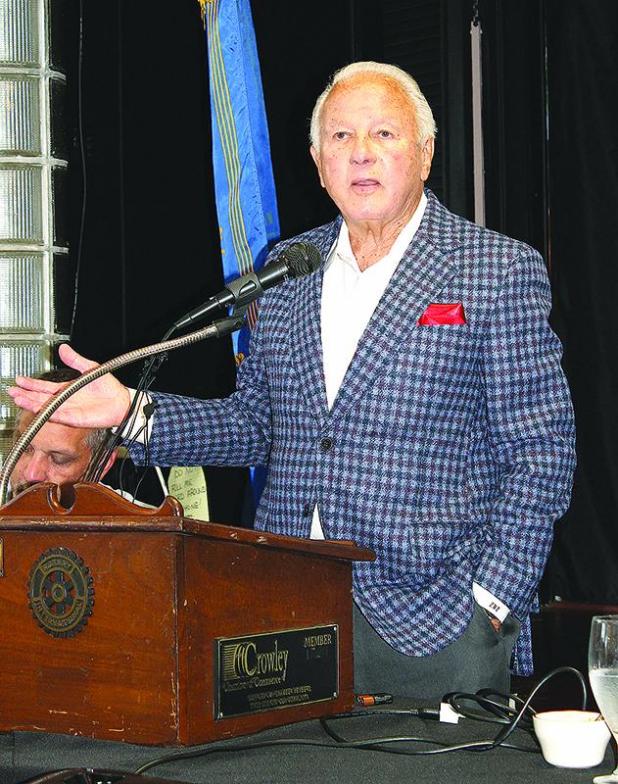 THE POST-SIGNAL / Steve Bandy
Former governor Edwin W. Edwards spoke Tuesday to the Rotary Club of Crowley at the Crowley Town Club, where, 65 years ago he first announced his intent to run for Crowley City Council.

Former governor Edwin W. Edwards, true to form, entertained members of the Rotary Club of Crowley Tuesday with stories from the past while offering a little insight into his vision for the future.
Accompanied by his biographer, Leo Honeycutt, Edwards recanted how he first came to Crowley as a young attorney and set up shop in an office over Gremillion’s Drug Store.
“I was next door to B.I. Moody, we answered each other’s phones,” Edwards said. “I have never had a better friend than B.I. He is a great asset to this area.”
Edwards noted that he and Moody currently are working together to aid Acadia General Hospital in the construction of its new emergency room.
The former governor remembered that, while growing up in Marksville, “I never had a cross word with my father or my mother. When I see the disrespect a lot of children have for their parents these days, it sickens me. You only have one mother, one father ... respect them.”
Going back to his younger days in Avoyelles Parish, Edwards said he was an avid hunter.
“I hunted all my life,” he said, noting that, at one point in his life, he owned “over 250” guns.
“I gave them all to Ducks Unlimited when I was charged and, with them they raised money for Duck Habitat,” he added.
“I believe in the constitution and I believe in the Second Amendment. I believe everyone should have the right to own weapons.
“But I am against weapons that fire 500 rounds in 5 minutes. Automatic rifles should only be available to military and police and people specially qualified to handle them.”
He acknowledged the argument that more people are killed by automobiles than by guns, “but automobiles aren’t built to kill people, guns are.”
Edwards also said he is opposed to arming teachers in classrooms.
“That’s not what they’re there for. But I do believe there should be at least one armed deputy on every campus at all times, mainly to keep the crazy people out.
“Why can’t schools have an entrance for students like they have at airports, with metal detectors to keep harmful weapons out of the classrooms?
“It’s time for us to address this issue and keep our children safe. There is no justification for someone walking into a school or a building and killing eight or nine people they don’t even know.”
Edwards told Rotarians that his father was a strict Presbyterian who disliked smoking, alcohol and gambling.
“Well, I gave him two out of three. I used to play poker right here in this building,” he said, drawing another round of laughter from the group.
Now 90, Edwards said he has “never even had a bottle of beer” and never smoked.
“Knowing what we know about tobacco, I see no use for it,” he said.
During a brief question-and-answer period, the topic of a possible Louisiana Constitutional Convention was brought up.
The last such convention was in 1973, during Edwards’ administration.
“We need a new constitutional convention, but I’m worried about the present philosophy of some of the people we have in government,” he said.
Wrapping up, Edwards said he has no regrets in his life “other than the fact that I probably won’t see Eli (his youngest son) graduate from high school ... but I’m going to try.
“You live in a great town,” he told the Rotarians. “It’s a great area, a wonderful place. I only wish everyone loved their community and their country as much as I do. We’d be living in a better country.”
In introducing Edwards to the Rotarians, Honeycutt noted that it was at the Town Club in 1953 — 65 years ago — that Edwards announced his first election bid, seeking a seat on the Crowley City Council.
Elliot Doré, a current councilman in Crowley, added that Edwards also was on the first board of directors for The Town Club.
Honeycutt author of Edwin Edwards: Governor of Louisiana, An Authorized Biography by Leo Honeycutt introduced Edwards via a 10-minute film, “EWE: This is Your Life,” which followed the former governor from his youth in Marksville through his political life and beyond.
Honeycutt added that the Edwards biography has sold “about 60,000” copies to date.
“In fact,” he added, turning to Edwards, “we only have about 30 copies left.”
Many of those copies were purchased and autographed following the lunch meeting.
The book ranks among the Gulf South’s top bestsellers and also won the Louisiana Historical Preservation Award for assembling, collating, recording and providing public access to in-depth research of contemporary Louisiana history.