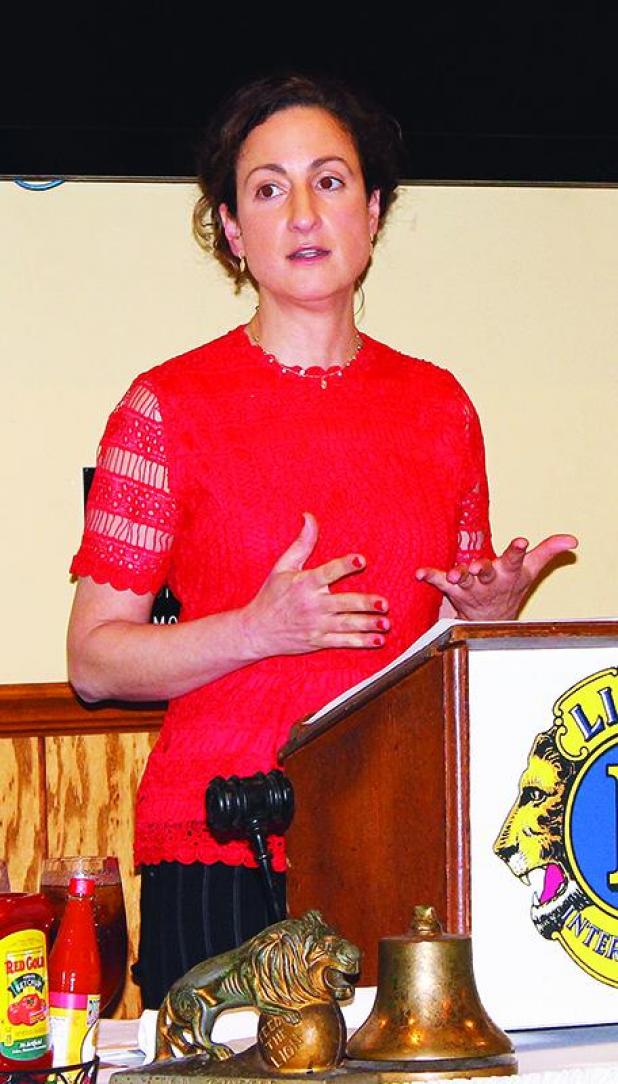 THE POST-SIGNAL / Steve Bandy
Dr. Tina Stefanski, Regional Medical Director for the Office of Public Health in Acadiana, was guest speaker at the recent meeting of the Crowley Lions Club. Stefanski spoke primarily about the Louisiana Emergency Response Network.

Dr. Tina Stefanski has been the regional medical director for the Office of Public Health in Acadiana for the past 18 years. With coronavirus outbreaks popping up worldwide and cases of mumps reported at at least two Louisiana universities, it seems like picking a topic to talk about would be easy.
But Stefanski wanted to tell members of the Crowley Lions Club about the Louisiana Emergency Response Network — LERN — which she touted as “one of the best things we do with state government.”
The network has a 29-member all-volunteer governing board and an annual operating budget of $1.8 million, “which comes to about 50 cents per person in the state,” she added.
LERN is an agency of state government created by the Louisiana Legislature in 2004 and charged with the responsibility of developing and maintaining a statewide system of care coordination for patients suddenly stricken by serious traumatic injury or time-sensitive illness — such as heart attack and stroke.
“Getting to the right place at the right time to receive the right care is a matter of life or death for these patients,” Stefanski explained.
LERN is organized into nine geographic regions and efforts in each region are guided by a Regional Commission – a member advisory board of key trauma and time sensitive illness stakeholders. Stefanski serves as vice-chairman for Region 4, which includes Acadia, Evangeline, Iberia, Lafayette, St. Landry, St. Martin and Vermilion parishes.
“We were the first commission up and running,” Stefanski said. “We wrote the protocols for response that were blessed by the governing board and adopted statewide.”
In fact, Stefanski said the statewide network is currently being studied by a number of other states as a model.
LERN’s Communications Center supports the Center for Community Preparedness by serving as the “first call help-desk” and 24/7/365 information coordinator for unfolding events.
In this role, LERN provides timely information that helps hospitals, other health care providers and relevant stakeholder agencies prepare for that manage response to the emergency events they face.
Stefanski was accompanied to Tuesday’s lunch meting at Rice Palace by Ali Iossi, director of emergency services at Acadia General Hospital.
Iossi explained that personnel at the call center know the capabilities of each medical facility in the region and what’s going on at those facilities.
“It makes for a lot easier and more competent routing of critical patients,” she said.
In addition, added Stefanski, personnel in the call center have detailed access to emergency equipment and services offered at the various hospitals throughout the region.
“For example, they know to tell the EMTs to by-pass a particular hospital that might not have access to a CT scan in the event of a stroke patient,” she said.
Currently, there are nine trauma centers in Louisiana where, only a few years ago, only two existed — New Orleans and Shreveport — according to Stefanski.
The ultimate goal is that at least 97 percent of the state’s population will live within an hour’s drive of a trauma center. Right now, only the extreme northeast area of the state falls short of that goal.
LERN focuses on:
• Trauma: Louisiana’s statewide trauma system is focused on serving severely injured patients — making sure those patients have timely access to the level of care they require.
“The need for such a system cannot be overstated as unintentional injuries are the leading cause of death in Louisiana — and the U.S. — for children and adults ages 1 through 44,” Stefanski said.
• Stroke: Stroke is a serious time-sensitive illness and is the fourth-leading cause of death nationally. Louisiana ranks as the ninth highest state for stroke deaths.
Stroke is also the leading cause of adult disability and the number one cause for new admissions to nursing homes.
• STEMI: ST-segment myocardial infarction is the most severe and deadliest form of a heart attack afflicting more than 700,000 Americans per year. This type of heart attack is caused by the complete closure of a major coronary artery.
Timely reopening of the closed artery (reperfusion therapy) can be the difference between life and death, yet up to 30 percent of STEMI patients never receive the time-sensitive treatments they need, according to Stefanski.
• Disaster Response: Louisiana’s Department of Health and Hospitals, Center for Community Preparedness coordinates the state’s response to public health threats of all types, including natural disasters (hurricanes, floods, pandemics) and man-made emergencies (industrial spills and explosions, other large-scale accidents, terrorist attacks).
Asked about coronavirus, Stefanski explained the protocol currently underway in the country regarding international travelers coming from China.
She pointed out that there have only been 15 confirmed cases (as of Tuesday) in the United States, all with links to China.
“The United States, and really the rest of the world also, is in ‘containment mode’ right now,” she explained. “Those with symptoms are being quarantined. There is no treatment.”
She said symptoms of the virus are “like the flu or a really bad cold.”
Addressing the recent outbreak of mumps at LSU and UL Lafayette, Stefanski said some of that traces back to the anti-vaccination movement sparked by “an utterly false study” that linked the MMR vaccine to autism.
She pointed out that the doctor who published that initial study has since lost his license to practice.
“Most people have been vaccinated, but the fact that international travel is so commonplace today, people come in contact with small pockets of un-vaccinated individuals,” she said.
She also touched briefly on the ongoing controversy surrounding vaping, explaining that “it’s the chemicals in the liquid” that are causing most of the problems.
“Also, a lot of the liquids contain nicotine, although it isn’t listed among the ingredients,” she added, explaining that the use of nicotine in individuals under the age of 25 hinders brain development, “and we don’t know what it (vaping) is doing to the lungs.”