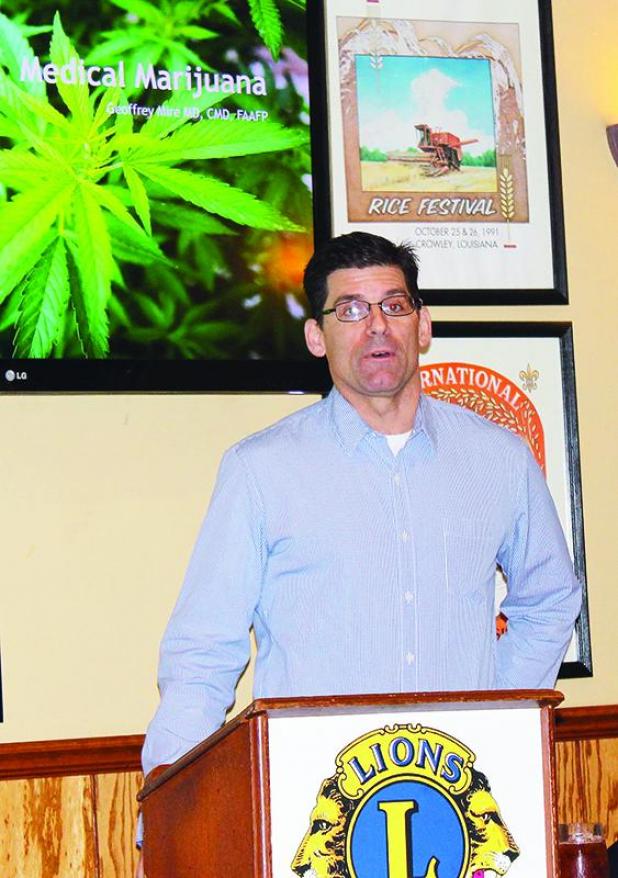 THE POST-SIGNAL / Steve Bandy
Dr. Geoffrey Mire practices in Scott and is one of about 100 doctors in the state of Louisiana certified to recommend medical marijuana to his patients. He spoke recently to the Crowley Lions Club.

Dr. Geoffrey Mire, one of only about 100 Louisiana doctors certified to recommend medical marijuana to their patients, said he has seen positive results in that treatment protocol.
Speaking to the Crowley Lions Club here, Mire, who practices in Scott, explained that doctors in Louisiana cannot prescribe medical marijuana for their patients, “we can only ‘recommend’ it.”
He said to prescribe it would be a violation of federal law.
The “recommendation” forms, he went on to explain, are very detailed and must be faxed — not hand-delivered or emailed or called in — to the dispensary.
And there are only nine such dispensaries in the state — the nearest in Lafayette — with a license for a 10th being held by the state until “demand” is decided.
The medicine is available only as a tincture in Louisiana. “If you’re smoking it, you’re breaking the law,” Mire said.
Medical cannabis also is highly regulated in the state, which works to his advantage, according to Mire.
“In some other states, a patient qualifies for medical marijuana and they give him a card. He brings that card to a shop and picks whatever he wants,” he said.
“I like to have more control. If what I recommend isn’t working, I know that I can tweak the amount and that the patient is getting exactly what I recommend each and every time.”
Mire said he was happy to see Louisiana finally put in place the regulations making medical marijuana available after “what I saw working with hospice and in some nursing homes.”
But there are still hurdles to be overcome, he added.
He said he is seeing more and more practical use of medical marijuana among his office patients while he has not been able to recommend its use for any nursing home patients.
“It’s because of the federal laws,” he said. “If a nursing home receives any federal funding, it cannot administer medical marijuana to any of its patients.
“And the popular notion is, ‘If you’re well enough to administer your own medications, you shouldn’t be in a nursing home’.”
Mire explained that he had been interested in the science of medical marijuana for a long time and went on to explain to the Lions how the drug interacts with the body.
“They didn’t teach me any of this in medical school,” he said. “I had to learn most of this on my own.”
Reviewing the history of the medical use of marijuana, Mire said Dr. William B. O’Shaughnessy first experimented with it in the United Kingdom in 1841.
However, marijuana was declared illegal in the United Stated in 1937 — despite opposition from the American Medical Association. It wasn’t until the late 1990s and early 2000s that some states started legalizing its use for medical purposes.
He credits Sen. Fred Mills, R-Parks, for working to make the drug available for patients in Louisiana for state-approved conditions.
Those conditions include intractable pain, cancer (pain), cancer (chemotherapy-induced nausea and vomiting), AIDS/HIV, cachexia (weakness and wasting of the body due to severe chronic illness), seizure disorder, multiple sclerosis, spasticity, Parkinson’s disease, glaucoma, PTSD, autism spectrum disorder, Crohn’s disease and muscular dystrophy (pain).