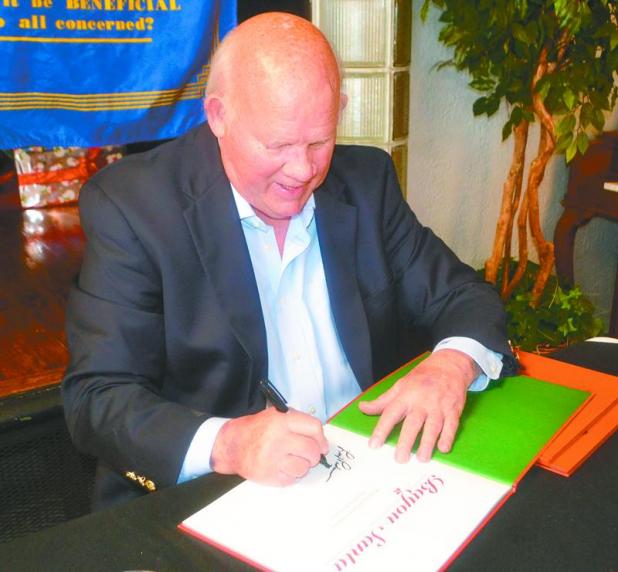 THE POST-SIGNAL / Desiray Seaux
Author Leif Nedland Pederson signs a copy of his new book, “Bayou Santa,” after reading to the Crowley Rotary Club at their weekly meeting held earlier this week.

Leif Nedland Pederson, a New Orleans native, presented his new book, “Bayou Santa,” to the Crowley Rotary Club at their meeting earlier this week.
Pederson currently divides his time between Slidell and Lake Charles. He is not only the successful author of the children’s book series “The Adventures of the Swamp Kids,” he has been a singer and big-band leader for almost 40 years and once toured as a featured vocalist for the Tommy Dorsey Orchestra.
The Tommy Dorsey Orchestra is most famous for hiring Frank Sinatra where the crooner first found success as a vocalist.
Pederson also served in the United States Marine Corps and is a member of Southeastern University’s Music Hall of fame.
Currently, and for the past 30 years, he has served as the senior vice-president of philantrhrophy at Lake Charles Memorial Hospital Foundation.
His journey to writing began 20 years ago when his son was a toddler and he wanted to use writing as a vehicle to tell his son about his experiences in the band and Marine Corps.
However, he quickly learned he excelled in writing poetry as he had been used to singing in a rhythmic sense for most of his life.
The inspiration for “Bayou Santa” was explaining why there was more than one Santa at various venues over the holiday season. The explanation is simple, he notes, since Santa lives at the North Pole he must enlist other Santa’s to help him during the Christmas season.
When speaking of his new book, “Bayou Santa,” Pederson says, “This book is my tribute to my mother’s Fourrier family linage, which we can trace back to the town of Port Royal in Nova Scotia, Canada. We are direct descendants of Lt. Gen. Charles de Saint-Etiene de la Tour, who was commissioned by King Louis XIII and served as governor of Acadia from 1631 to 1642 and again from 1653 to 1657.”
The Christmas book focuses on Cajun culture and addresses the age-old question, “How does Santa go around the world in one night?”
The story is set deep in the Atchafalaya Basin and bayou’s of Southwest Louisiana, the heart of Cajun Country.
The main characters are Noel Robicheaux and his wife Aimee who live in the swamp and travel by pirogue collecting wood to make toys for children, who rarely received new toys.
The story goes on to tell the tale of how the “Bayou Santa” or Papa Noel was chosen by the big guy in the North Pole.
In a special note from the author, Pederson pens, “While I can’t say this story is exactly how he came to be, it is how I remember it, and it stays where we keep all of our magical memories — in that wonderful corner of our mind we call our imagination.”
Although, the book can be read to children it is not intended to be just a children’s book and more a “holiday coffee table book” for the family to enjoy.
The forward of the book states, “The wonder of Santa Claus is in all of us, and if we are lucky, that wonder lasts forever. This book is dedicated to all the kids in Bayou Country and beyond who always have a sparkle in their eyes at the mere thought of Santa, Papa Noel, St. Basil, Julenissen, Grandfather Frost, Father Christmas, or the Old Man of Christmas. No matter how he is known, his love for children is endless ... as is our love for him.”
With a great story and beautiful art work along with a price tag of only $20, the Christmas book with Cajun flair would make a wonderful last minute gift for both children and adults alike.
“Bayou Santa” is bound to become a Cajun Classic Christmas story is available for purchase at the Rice Palace and Ray’s Gifts and Interiors. Call to reserve a copy.