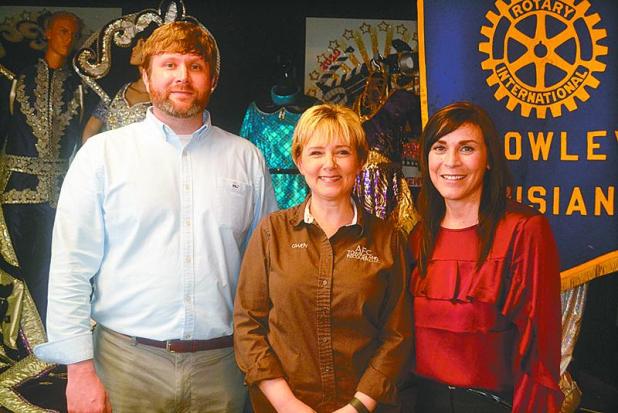 Local Rotarians met on Tuesday of this week when Jonathan W. Thompson, M.D., of Oncologics, discussed suggested cancer screenings and explained radiation treatment.
Thompson, a Ruston native, is a graduate of Louisiana Tech, where he focused in engineering; Louisiana State University of New Orleans, where he received his M.D. He completed his residency at University of Alabama Hospital in Birmingham.
He is also board certified in Radiation Oncology, American Board of Radiology Board Eligible.
“ I chose radiation oncology for a number of reasons. First, the patients are so incredibly grateful for the care they receive during the difficult time surrounding their diagnosis,” Thompson said.
“Radiation oncology also allowed me to apply my engineering background to what is arguably the most technical field in medicine and is constantly evolving.
“I am blessed to be a part of OncoLogics, which has some of the most caring and compassionate people I have ever met. Our staff truly understands that cancer is much more than simply the diagnosis, and the care we provide goes far beyond what happens in the treatment room.”
OncoLogics has had a location in Crowley for the past 23 years. The six physicians working for OncoLogics are from Louisiana and three of those six are from Acadiana.
OncoLogics has offices in Crowley, Lafayette, New Iberia ad Opelousas.
Thompson discussed the three methods traditionally used to treat cancer — surgery, chemotherapy and radiation therapy. Essentially, radiation therapy is high energy X-rays, he explained.
Common cancers that should be screened for include:
• Breast cancer. Studies show women should begin being screening every two years at age 50 until 74. However, in terms of preventive medicine, it can be suggested that realistically women should start screening around the age of 40 until death, Thompson added.
• Colon cancer screenings should begin around age 50, with a colonoscopy, and should be repeated every 10 years.
• Prostate cancer screenings do not have a recommended age to begin screening. But, Thompson suggests that it be a shared decision between a patient and doctors.
However, men of African American descent and those with a family history should begin screening around 40 to 45 years old.
• Lung cancer screening should begin when a smoker reaches “30 pack years,” which equates to a pack of cigarettes per day for 30 years. Therefore, if a smoker consumes two packs per day, screenings should begin at 15 years.
It is recommended that a yearly screening (CTs) for three years even if you stopped smoking 12 to 15 years ago.
• Skin cancer has no formal screening recommendations. Yet, if you have spent a lot of time outside you should see a dermatologist to check skin, Thompson said.
Thompson, urges everyone with skin concerns to have it looked at. Skin cancer accounts for about 15 to 20 percent of what is treated in the clinic, he said.
Skin cancer is also not particularly a preset age recommended screening as tanning beds may be worst than regular sun exposer. Some women as young as 20 years old have been diagnosed with skin cancer reportedly resulting from tanning bed exposure.
In a question-and-answer session, a member of the audience asked, “Why does Louisiana have such high cancer rates?”
Thompson answered that the high percentage of cancer patients has a lot to do with lifestyle habits. A lot, of Louisianans’s smoke and drink, he said.