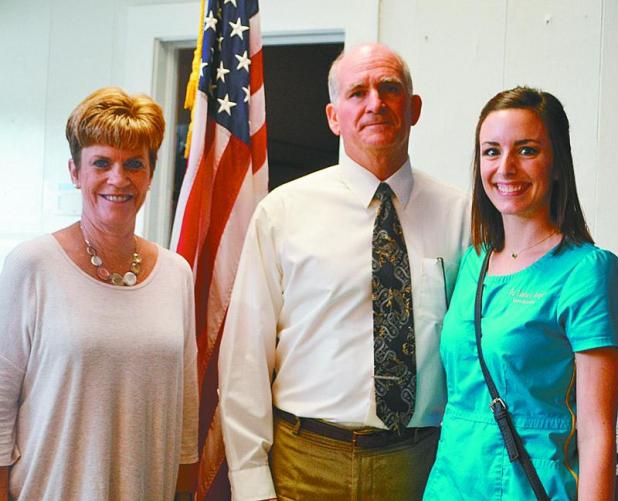 David G. Baker, D.V.M., Ph.D, M.P.A, is the director and professor, of Division of Laboratory Animal Medicine at Louisiana State University. He is also the attending veterinarian for LSU’s Mike the Tiger.
Baker began his presentation to local Rotarians on the famous mascot with a history of how and why the university acquired a tiger in 1936.
LSU was first called the “Tigers” in 1896 by former LSU President Maj. David F. Boyd. in reference to the state’s confederate heritage. Louisiana troops became known as the “tiger rifles” during the civil war. The rifles was dropped and LSU became known as the “Fighting Tigers.”
In 1934, Athletic Director Trainer Chellis Mike Chambers, Athletic Director T.P. Heard, Swimming Pool Manager and Intramural Swimming Coach William G. Hickey Higginbotham and LSU law student Ed Laborde raised over $750 dollars to purchase a young male tiger.
Mike I, was originally named Sheik, but his name was changed in honor of Chambers. He lived for 20 years, traveling with the team and serving as the official mascot of LSU before succumbing to kidney disease. His pelt is stuffed and on display in the LSU Natural Sciences Museum on the campus in Baton Rouge.
Mike II, has a lot of mystery behind his arrival and departure from the university. Arriving in secret in 1956, Mike II was revealed the day after his arrival. However, less than a month later it was alleged that he died at only eight months old, secretly buried under a willow tree and then later replaced with another tiger cub.
LSU denied all accusations and issued a statement saying that he was having trouble adjusting and was being kept in his house.
Then just two years later in 1958, Mike II died at the Audubon Zoo of complications associated with multiple fractures to his left rear leg.
Mike III arrived on campus in 1958, just in time for the national championship football season. He was the last tiger purchased by the university as all his processors would be donated or rescued.
According to Mikethetiger.com, the official site of the LSU mascot. Mike III was said to growl on verbal cue. Joel Samuels, the “Tiger Man”, had a way of getting Mike III to growl by saying, “Get ‘em Mike.”
Mike III served for 17 years as mascot and died in 1976 of pneumonia after the only losing season of his lifetime.
It was in 1973 that LSU School of Veterinary Medicine took over the care of Mike.
Then there was Mike IV, who was a donation from August A. Busch III of Busch Gardens.
Baker said, “Mike IV was large and dangerous at over 500 pounds. Mike IV’s biggest claim to fame is the night he escaped (someone cut his cage’s locks) and roamed around campus until he was located, tranquilized and returned to his cage. Mike IV reigned as mascot for 15 years and then retired to the Baton Rouge Zoo where he lived for five more years undisplayed.
Mike V stole the hearts of every Tiger fan in 1990 as he was obtained as a four-month-old cub. He was a gift to LSU, coming from the Animal House Zoological Park in Moulton, Alabama.
In 1996, Baker took over the care of Mike V. The large cat was known to have a calm and friendly disposition. He was the mascot for 17 years until he passed away in 2007.
Next in line was Mike VI, he arrived at two years old and weighed about 500 pounds. He was donated from the Great Cats of Indiana. Unfortunately, Mike VI was diagnosed with cancer and despite treatment across town at the human cancer center he succumbed to the disease.
And last but not least is Mike VII, the current mascot, and LSU’s new baby. In August of this past year 11 month old Harvey, now Mike VII, was brought into the university in a livestock trailer to avoid all attention. He is a rescue from a sanctuary in Florida and is now 305 pounds and has racked up almost 900 photos from his fans in three months. Although he is still very young, Baker says “he is very playful and interactive.”
Baker stressed that LSU takes very good care of Mike and is now considered a tiger sanctuary. As previously mentioned, LSU no longer purchases tigers so as not to encourage the black market of large cat sales. Tigers are a big business with a lot of money exchanging hands. Cubs are profitable as until they reach four months or 50 pounds until they are no longer allowed to be “petted” by the public. Pelts and Chinese tiger bone wine are status symbols in some parts of the world.
It is important to remember that these animals are never fully domesticated and although hand-raised, a tiger is an A-Pex preditor, and Mike VII has bit Baker twice already.
Mike VII no longer leaves his home unless for medical care and no longer goes to football games.