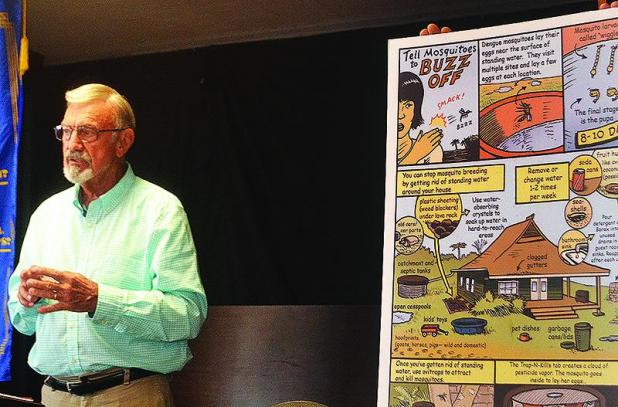 THE POST-SIGNAL / Desiray Seaux
Glenn Stokes, owner and president of Mosquito Control Contractors, Inc., spoke to members of the Rotary Club of Crowley earlier this week on ways to control the pests.

The daddy mosquito asked, “How was your first flight son?” The baby mosquito answered, “Feels great, Dad! Everyone was clapping for me.”
With the temperature soaring into the 90s and afternoon “pop-up” showers in the forecast for nearly every day this week, mosquitoes are a force to be reckoned with.
Glenn M. Stokes, owner and president of Mosquito Control Contractors, Inc., (MCCI) was on hand to discuss mosquito control with members of the Rotary Club of Crowley earlier this week.
MCCI currently holds the mosquito control contract for Acadia Parish. It was the first mosquito control contractor in Louisiana in 1982.
Stokes, a Rapides Parish native, holds a Bachelor of Science Degree in biology and chemistry from USL, a Masters of Science in entomology from University of Nebraska, and chemistry, a Master of Arts in evolutionary biology from Harvard University as well as one and a half years study at the University of Florida in medical entomology and sanitary engineering.
He has been a worldwide consultant to the World Health Organization in mosquito control since 1965, USAID (U.S. Department of State), Foreign Countries, Disney World, and African Development Bank.
He is past president of both the Louisiana Mosquito Control Association and the American Mosquito Control Association.
Among the advice offered by Stokes to keep your home safer is to get rid of standing water.
“Mosquitoes lay their eggs and grow in standing water,” he said. “It only takes seven days for a mosquito egg to hatch and become an adult mosquito.”
Stoked recommended emptying water out of buckets, old tires, flower pots and toys. Also, change water every few days from pet bowls and bird baths.
“And repair leaky plumbing and outside faucets,” he said. “Connect open waste-water drains to a sewage systems, or construct separate sump or leach lines and keep good screens on your windows and doors as screens will keep mosquitoes out.”
Ways to avoid mosquito bites lie in knowledge of the insect’s habits, he said.
“Mosquitoes bite in the early morning and early evening hours. Two hours after the sun sets is when mosquitoes bite most. If you go out at these times wear long pants and long sleeved shirts,” Stokes advised.
Also, use insect repellent with DEET in it. Put the repellent on your skin that is not covered by your clothing.
“It is of extreme importance to practice using insect repellent,” Stokes said. “West Nile is now found throughout Louisiana.”
Stokes said dead birds are a sign the West Nile virus could be in your area. Birds like crows, ravens, and jays get very sick and can die from the West Nile virus. You can not get West Nile virus from touching a dead bird.
To monitor the spread of the virus, the sate is tracking dead birds. To report a dead bird go to: www.mcci.info or call 337.785-4456 for Acadia Parish.
Important facts about West Nile Virus: West Nile Virus is a mosquito-borne disease that can cause Encephalitis (inflammation of the brain) or Meningitis (inflammation of the lining of the brain and spinal cord; Mosquitoes spread the virus after they feed on infected birds and then bite people, other birds or animals.
Most people who are infected with West Nile virus will not develop symptoms. Some may become ill in three to 15 days after being bitten.
Mild symptoms may include: headache, slight fever, rash, body aches and swollen lymph glands. Severe symptoms may include: high fever, neck stiffness, coma, convulsions, headache, stupor, disorientation, tremors and paralysis.
Severe illness is most common in the elderly but anyone can get the virus. There is no treatment nor preventative vaccine for man.