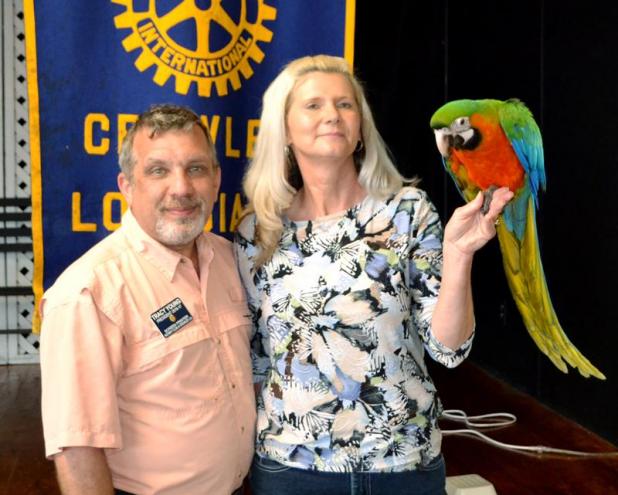 Rotary Club of Crowley Tracy Young, left, thanked Sarah Walker, right, for her presentation on parrots. Walker brought two of her parrots with her including Gumbo, whom she is holding, and Harley (not pictured).

Rotary meeting for the birds

You just never know who, or what, will be the point of discussion at Rotary Club meetings it seems.
Case in point, Sarah Walker’s talk about birds, particularly parrots, Tuesday.
The club welcomed not only Walker, however, to the meeting as its speaker, but also two of her parrots – Gumbo (a Catalina macaw) and Harley (an African grey).
Walker is no stranger to birds, as a breeder, she once had as many as 300 and would travel the circuit to sell the birds. As time has dwindled on, however, those numbers have reduced completely. She has moved to the northwestern part of the parish and has 51 acres of land to herself, her birds and her various other animals on “The Lazy 3 Ranch” – including a zebra named Maggie May, which is a story onto itself.
Zebras are more of a herd animal than their cousin the horse and, thus will latch onto another animal as its herd. In Maggie May’s case, that was a miniature donkey. The seller of the zebra and donkey said in time, the duo would make sense to Walker. Sure enough, one night Walker was rounding up the animals for the evening and feared the zebra had cleared the fence. In hopes that she was wrong, however, she shook her food bag and the donkey quickly appeared with the zebra right behind.
Life is very interesting on the ranch, according to Walker, even with far less than 300 birds around. She and her husband have raised her nieces and now are raising her grandchildren, which means the birds are picking up quite the interesting vocabulary, particularly Harley.
Walker has had Harley for 17 years now and describes her as a friend as Walker got the bird and hand-fed her since she was a baby. Often, if she leaves to run an errand, Walker will get a call from her husband, saying her friend is looking for her.
African greys, according to Walker, are quite intelligent and are described as one of the most talented talking/mimicking birds on the planet. So, Harley picks up “power words” very quickly. Her new favorite is “jerk.”
Walker told a story about getting Harley and Gumbo ready for Tuesday’s presentation when Gumbo decided he wanted the shelf Harley was on and pushed her off.
“Are you OK?” asked Harley, as that is Walker’s response to any bird that may have something like that occur.
After making sure Harley was the one that was “OK” she put the bird on a new shelf, seconds later, and seemingly perfectly-timed toward Gumbo, Walker heard something else from Harley.
“Jerk.”
“They keep you entertained,” said Walker.
Gumbo, meanwhile, is a lot younger than his presentation counterpart. Walker is currently training Gumbo to be picked up soon. As part of that training, wings have been clipped to make sure Gumbo doesn’t get too far from her or his new owner and he has been socializing with both the new owner and Walker often.
Walker explained the importance of socializing with the birds.
Parrots, in general, have a very large array of life spans. Some can live as few as six years, others can live into their 80s and beyond. It’s all a matter of the diet maintained and putting the animal in the correct situations.
She also relayed a few other interesting tidbits about parrots:
• A DNA test is needed to find out the gender. Unlike other animals that have more obvious indicators, parrots do not have those, so a few drops of blood on a card are shipped off so that Walker can find out the gender.
• While not necessary, Walker likes to keep breeding couples together. Parrots do not start laying eggs until they are 8 years old, but after that, birds can breed and lay eggs for many years. However, the slightest change – moving a cage, the climate, etc. – can cause a parrot to stop laying eggs. Only time will tell then if the bird will restart laying or not.
• If a bird is put from a more free-flying space to a caged space, behavioral changes can be expected. Also, parrots bite, and often the bite isn’t exactly soft. Walker points out that parrots’ beaks are designed to break up items like Brazilian nuts. Thus a painful bite is all but assured.
• Walker’s parrot prices are on the low end of the spectrum, but for an African grey, a person is looking at spending $800-$1,000 through a breeder and up to $1,800 or so through a pet store. Likewise, macaws start at $1,200 through a breeder.