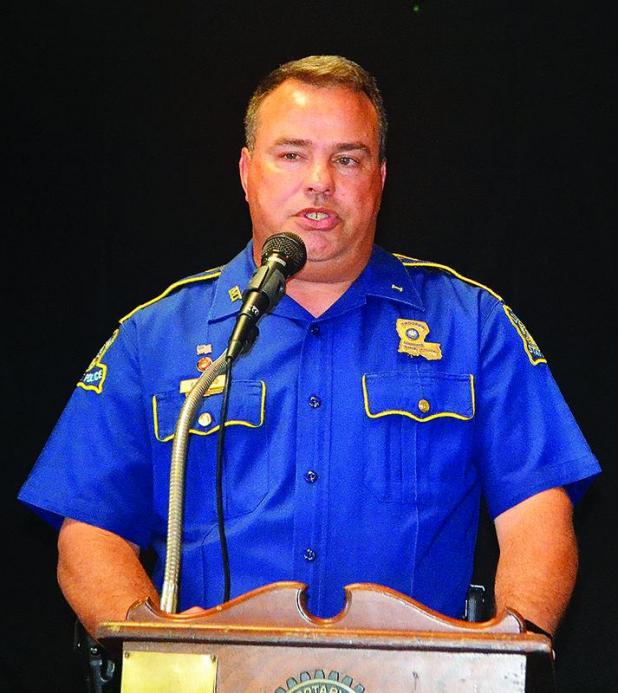 Master Trooper Brooks David, Public Information Officer, for Louisiana State Police Troop I, spoke to the Rotary Club of Crowley this week with an update on Troop I and all the things the Troopers do in the community.
One of the many things State Troop I offers is child safety seat inspections every Wednesday at Troop I headquarters from 8 a.m. to noon, or by appointment.
Troop I is located in Lafayette Parish at the intersection of Pont Des Mouton and Interstate 49.
Motor vehicle crashes are the leading killer of children in the United States and many injures and deaths can be prevented by properly using car seats, according to David.
With four out of five seats misused, certified technicians provide a valuable service to parents and caregivers concerned with safe transport for their most precious cargo.
David said he does not recommend having hanging toys or mirrors attached to child safety seats as these objects can and likely will impact the restrained child in the event of an accident — and “the attached items will have a lot of force during a collision.”
Sudden Impact is a program designed for high school students in which Troop I is a partner with Lafayette General. The program involves Troopers speaking to students, a trip to the hospital during their sophomore year, a mock wreck during their junior year and a mock trial during their senior year.
Among the alarming situations that David warns of is sex trafficking and the stealing of prescription medications out of family medicine cabinets.
Unfortunately, sex trafficking is getting big in the area, according to the Trooper. People hire kids, not paying them, forcing them into a life of prostitution.
Some of the things the Troopers are doing never hit main stream media, according to David. For example, the troop may stop an 18-wheeler full of drugs. After seizing the truck and narcotics, the Troopers will ride with the trucks, possibly making additional arrests all along the way to the truck’s final destination.
The Acadia area, specifically, that stretch of Interstate 10 between mile markers 71-77, has the highest fatality rate. In the recent past, that six mile stretch of I-10 has been the location of seven fatal crashes resulting in 10 deaths, David said.
Another, topic discussed is the new driver’s license app, LA Wallet, for smart phones. It is 100 percent legal for driving purposes per Act 625 of the 2018 session.
The iOS app went live under a “soft launch” in the App Store on June 26 and the Android version went live in the Google Play Store on July 2.
State Troopers did not create the application, and there have been a few glitches discovered in it, according to David. The application was created to help police identify a driver in the event that their hard copy license is not on that driver’s person.
It will be used to match a face with the associated license number. The application may only be used for traffic stops or check points.
Currently, the Louisiana Legislature is reviewing further utilization of this technology, such as official acceptance at air port security, for alcohol and tobacco purchases, and acceptance in other states.
LA wallet is current and receives live updates from the DMV.
Troop I encompasses eight individual parishes, including Evangeline, St. Landry, Acadia, Lafayette, St. Martin, Vermillion, Iberia and St. Mary. it encompasses 5,686 square miles with 8,586.74 miles of highway.