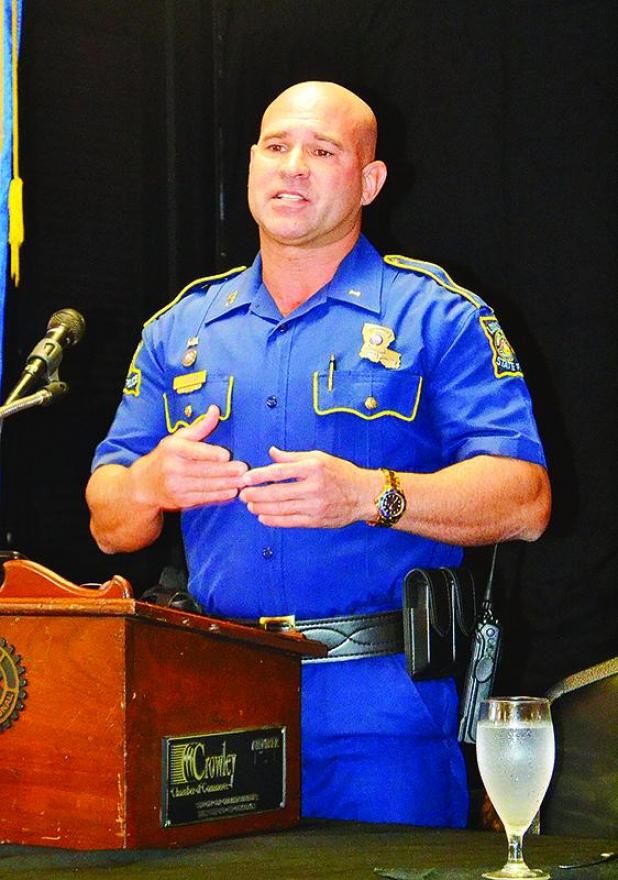 THE POST-SIGNAL / Desiray Seaux
Trooper First Class Thomas Gossen addressed members of the Rotary Club of Crowley recently about the dangers of Internet/cyber bullying, focusing on the use of cell phones.

Modern technology is a wonderful thing, but it can easily be misused.
Earlier this week, Trooper First Class Thomas Gossen addressed the Rotary Club of Crowley on Internet/Cyber Bullying with a focus on cellular phones.
Gossen, a Rayne native, is the public information officer for the Louisana State Police Troop I.
The trooper began by addressing the club about the importance of wearing seat belts — not only wearing a seat belt, but wearing a seat belt properly.
He said, wearing a seat belt incorrectly “changes the design of it; it does not work (properly) that way.” And, also gave the vehicle crash statistics in Troop I’s area from last year.
According to Gossen, “In 2018, 64 people were killed in 56 crashes and 54 percent of those victims did not have on a seat belt.”
He further explained that “force is force.” In a 50-mile-per-hour crash, an individual would experience 5,000 pounds of force, therefore, wearing a seat belt properly is vital to chances of survival.
The conversation then moved on to the dangers of allowing minors to use cell phones unsupervised.
Gossen used a recent event involving “sexting” at a parish school as an example of the danger.
Sexting is defined as sending sexually explicit photographs or messages via mobile phone.
Gossen explained that taking, sending or keeping inappropriate photos of someone under the age of 17 is a crime. “The law of child pornography applies to everyone.”
Cell phones also expose children to cyber bullying among peers or strangers using intimidation, abuse and torment.
Due to the rapid advancement of modern technology, phones can broadcast juveniles to online predators, just as easily as a computer.
Social media applications, better known as apps, such as Facebook and Snapchat allow online predators to see kids post about things like fights with parents or hating school.
Predators look for specific things in order to have an “in” to talk to their victims, the trooper explained.
Various apps have a messenger feature allowing predators the ability to easily contact juveniles to initiate conversation.
The Internet is another vehicle of human trafficking. However, human trafficking can often be complicated to understand in some cases.
In order to better understand a possible scenario, Gossen gave the example of a young girl working at a fast-food restaurant who becomes a victim of human trafficking.
For example, the predator visits restaurant numerous times, slowly gaining the trust of the juvenile. Eventually, the predator gives the soon-to-be-victim his/her phone number and says to call if needed.
The predator will continue to “groom” the target by buying lunch or groceries, providing basic needs for the juvenile, Gossen explained.
So, when the juvenile experiences trouble at home, she contacts predator for help. The predator provides a couch for the target, again, “providing basic needs.
It is at this point the predator tells the target that, since he did this for her, now she needs to do a “favor” for him. Fast forward and the fast-food worker is now a victim of human trafficking.
“No one throws a teenager car keys without teaching them to drive. The same approach needs to be taken with Internet accessibility on a phone,” he said.
The trooper ended the conversation with an additional warning that removing an app from a cell phone doesn’t necessarily disable it.
He said the account is still active and accessible by re-downloading the app.
There is also the possibility of an application being hidden in a folder that looks like an regular calculator app on the phone.
“Software has been created to hide applications in designer folders, often going undetected” by parents, he said.
The trooper encouraged the club members to be vigilant of internet/cyber bullying crimes.