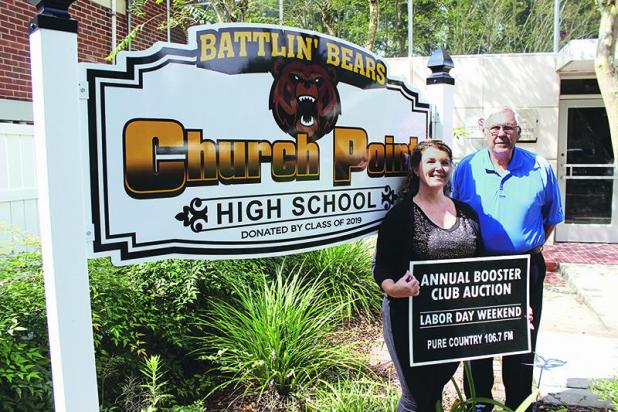 Variety of items up for bid during CPHS Booster Club auction

From autographed NFL jerseys, a meal of freshly cooked cow tongue and even once, a kitchen sink, the Church Point High School Booster Club Radio Auction has sold a variety of items over the years.
CPHS Principal and past Booster Club president Lee Ward Bellard said, “You know how they say everything but the kitchen sink? We’ve literally had a kitchen sink for sale during the auction.”
This year’s auction will be Saturday and Sunday, Aug. 31-Sept. 1. The auction will be broadcasted over 106.7 FM KSIG from 5 p.m. until midnight Saturday and from 3 p.m. to 10 p.m. on Sunday.
The auction telephone line is (337) 250- 4990 and the call back line is (337) 250-4930
Last year, 337 items were donated to the auction and a total of $31,390 was raised. Funds from the auction support all of CPHS’s athletic teams as well as the school’s spirit groups, and money from the booster club paid for buses to transport the football team and spirit groups to Sterlington High School in north Louisiana for a playoff game last year.
In the years since the auction began, donated items have ranged from dishes like peanut butter fudge, quiche and blackberry pies to a pressure washer, a cast iron pot, a Dutch over and a water slide. A used vehicle, live animals, ice chests full of iced down beer and fishing trips to Toledo Bend have also been donated to the auction.
“Smokey Lafosse is good at getting LSU and Church Point football helmets,” Bellard said. “He’ll get past Church Point athletes from 30 years ago to sign some of the helmets. Mark Carrier donated a pair of (NFL football player) Odell Beckham's shoes. Those went for an unreal amount.”
Bellard said freshly cooked meals with all the trimmings are also hot items during the auction
“People would give an uncooked ham, and one year, (the late) Sylvia Sims started baking a ham with the pineapples and all that stuff,” Bellard said. “Then it got to the point where people said, ‘Well I’m going to cook four ribeyes.' Then we started having families get together and donate eight ribeyes and all the fixings.”
Freshly cooked meals up for bid for this year are: pork jambalaya with corn and bread (feeds 20); meatball stew with potatoes served with rice, corn and bread (feeds 15); stuffed, sliced brisket served with smothered potatoes, corn and bread (feeds 10); crawfish étouffée served with rice, corn and bread (feeds 15); grilled ribeyes topped with crawfish étouffée served with loaded mashed potatoes, corn and bread (feeds 10); smoked ribs with jalapeño poppers served with loaded mashed potatoes, corn and bread (feeds 10); calf tongue in a gravy served with rice, corn and bread (feeds 10); and shrimp fettuccine served with corn and bread (feeds 10).
Bellard became involved with the booster club as a high school freshman, and he is in this 49th year of working with the club. He said the auction started some time in the mid-1960s.
“The auction started out with trying to get a bus, back when we (CPHS) had only basketball and football,” Bellard said. “Those people (booster club members) started picking up money, just going around collecting money and having bake sales. It evolved into a radio auction (in the late 1960s). They even had a time when the electricity went out during a hurricane, and they went out on Main Street and started selling cakes.
“The funny thing is, about five or six years ago, we auctioned off an old bus we had. How ironic was that? This whole thing started with trying to make money to get a bus, and we ended up auctioning one of our buses one year.”
Current Booster Club President Allison Higginbotham has been a member of the booster club for four years, and she has been president for two years.
“I love helping the kids get everything they need to reach their highest potential in sports in high school and beyond,” Higginbotham said. “The goal of the club is to help all of the kids thrive.”
Higginbotham said one of the booster club’s biggest goals is to put money aside each year in case the organization is not able to host the auction due to some unforeseen event, namely a hurricane.
Both Bellard and Higginbotham recalled a past auction when two brothers got into a bidding war over their own mother’s cake.
“That cake went for $200,” Higginbotham said. “Some of the simplest items, like being a manager for a football game or getting to cheer with the cheerleaders, go for a lot of money.”
She added, “Everything runs so smoothly with the help from the people in the community.”
For more about the auction, visit the Church Point High School Booster Club Auction Facebook page.