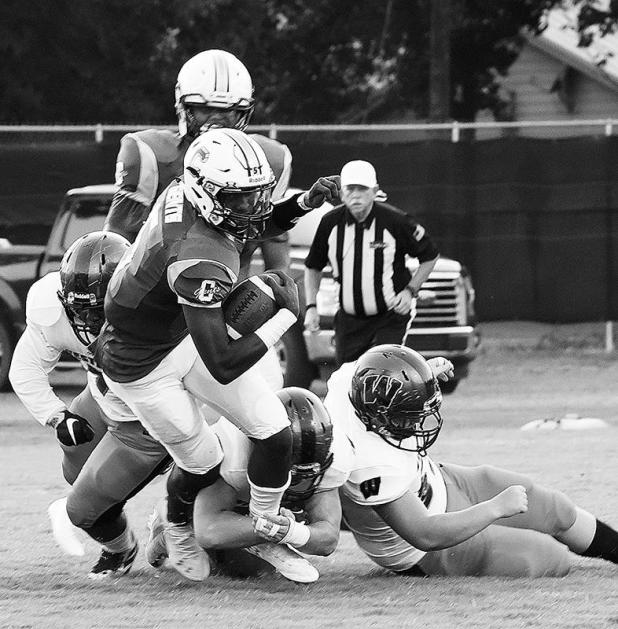 THE POST-SIGNAL / Josh Dugar
Crowley High quarterback Marquis Garrett attempts to slip away from a defender last week during the Gents’ 26-20 victory over Westlake at Gardiner Memorial Stadium. The Gents will travel to Cecilia this evening for a 7 o’clock contest against the Class 4A Bulldogs.

The Cecilia Bulldogs and the Crowley Gents have built up a nice little rivalry over the past four years and the series continues Friday when the Gents take on the Bulldogs at their new turfed stadium.
The Gents have the edge in the latest series against the Bulldogs, winning three of the last four meetings since 2015.
The Bulldogs, however, have the latest victory, a 49-34 win in a shootout at Gardiner Memorial Stadium in 2018.
“It’s really become a good rivalry,” said CHS coach Jeptha Wall of the matchup with the Bulldogs. “It seems like each year, the team that isn’t supposed to win actually does.
“I think it’s two teams that are pretty well matched up and kind of do the same things for the most part.”
This year’s meeting is eerily similar to last season’s as the Bulldogs come in winless after dropping their first two games of the season.
That 0-2 record, however, can be deceiving.
The Bulldogs lost their home opener to rival St. Martinville, 25-12, and were then drubbed by Class 5A Comeaux last week, 34-7.
Wall, however, is not overlooking the Bulldogs.
“They still have that old Cecilia speed and some good-looking receivers,” said Wall. “They usually have some kind of scatback and one that can run downhill and they usually have a salty defensive line.
“It’s the same thing you see every years out of Cecilia. It will be one of those classic matchups.”
Offensively, the Bulldogs have yet to really have that breakout game.
St. Martinville limited the Bulldogs to just 64 total yards and three first downs in the season opener while Comeaux held the Bulldogs to just 157 total yards and eight first downs.
The Bulldogs, who run a spread offense, have a pair of quality senior backs in Danarious Journet and Dillard Calais.
Journet broke onto the scene in the middle of the 2018 season and rushed for 556 yards and eight touchdowns.
Calais was also a force last season and is the younger brother of former Cecilia standout and current Louisiana/Lafayette running back Raymond Calais.
“Journet runs hard downhill. He’s a good runner, said Wall. “And Calais is more of a scat guy.
“They do a good job of mixing things around.”
At quarterback, the Bulldogs return 6-foot-5 senior Tyler Abshire, who threw for five touchdowns last season against the Gents.
The Bulldogs’ struggles weren’t limited to the offensive side of the ball over the last two weeks.
Coach Dennis Skains’ defensive unit has allowed 59 points and 977 yards in two games, including 857 yards on the ground.
With that said, the Bulldogs do have a number of highly skilled members on the defense and what impresses wall the most is their team speed as a unit.
“They have really good team speed,” said Wall. “They just look like kids that have played together for a long time and they can fly.”
Koen Helaire and Jalen Celestine are the leaders of the defense.
Helaire, a 6-foot-1, 220 pound linebacker led the team in tackles last season with 70, including six sacks.
Celestine, a 6-foot-3, 180 pound cornerback, is a University of Baylor commit.
“Helaire is just a really good player and he plays some at fullback,” said Wall. “And Celestine is the same way. He’s pretty good.”
For the Gents, the key will be to get the running game going early and make the catches when they go to the air.
Last week, the Gents had several drops in key situations, including one that would have likely gone for a touchdown.
“I think people are starting to figure out some of the things we do offensively and, honestly, we have to catch the ball. If we don’t start coming through in the passing game a little bit more, I think we are going to struggle.
“And we’re still hit-and-miss up front on blocking with the offensive line. Those are our biggest concerns on offense.
The Gents also struggled on the ground in their 26-20 victory over Westlake. The managed just 140 rushing yards on 38 carries.
“People have learned what they can and can’t take away from us a little bit and they are going to force us to be as active as we can to just hand the ball off and get inside the box. That’s why our offensive line has to really kind of gel.”
Obadiah Butler was the Gents’ leader last week with 60 yards rushing and a touchdown on 12 carries. he also had four receptions for 41 yards.
Chris Moore also had a good night with 11 carries for 28 yards.
“Obadiah had a good game, Chris (Moore) had some good runs and Rodney (Goodley) had a nice run.
“And I thought Marquis (Garrett) played well at quarterback. He read what the defense was giving him. He didn’t try and do more than what was expected out of our offense...we just have to catch the ball, bottom line.”
Defensively, the Gents bent, but didn’t break in allowing 260 total yards.
That unit also forced three turnovers, two of which turned into points for the Gents.
One of the brightest spots on the Gents’ defense last week was defensive back Tyron Goodley, who had four pass breakups, six solo tackles and eight assists
“I thought Tyron Goodley had a good game,” said Wall. “He was kind of left out on an island a lot playing some man coverage and I thought he had a good game.”