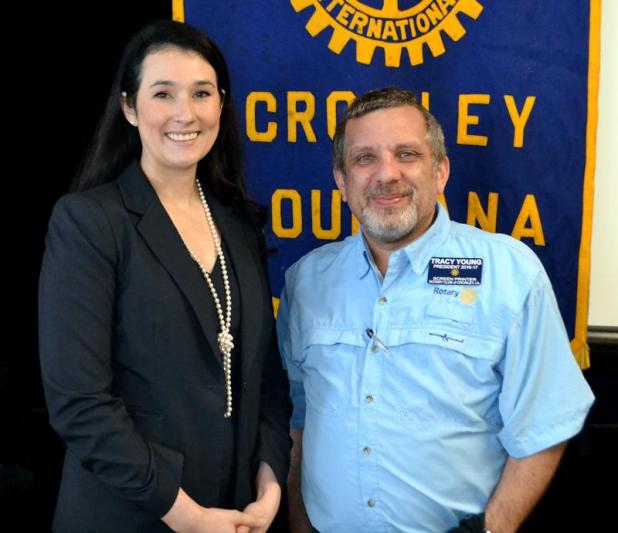 Crowley Chamber of Commerce President and CEO Amy Thibodeaux, left, addressed her fellow Rotarians Tuesday with a look at the many things the Chamber did in 2016. Thibodeaux expressed interest in making the report an annual occurrence for the community. Thanking her for the program is Crowley Rotary President Tracy Young, right.

Crowley Chamber of Commerce President and CEO Amy Thibodeaux took Rotary Club program Tuesday as a chance to talk about the Chamber, and specifically, its year.

“I want to make an annual report one of my goals this year moving forward,” said Thibodeaux. “It kind of keeps us accountable from the Chamber side and let’s us tell the community what we do. There are so many times I hear, ‘I didn’t know you guys do that’.”

In a nutshell, the Chamber saw 12 grand openings last year, and 29 new members added. Its membership is now 260 and oversees the representation of over 4,000 employees in the area. Also, according to the Louisiana Economic Development group’s figures, Acadia has over $105 million in investments. And those numbers are still growing today.

Thibodeaux explained that the parish has been fortunate to weather the downward economy for some time now and still see businesses opening in a time where others are closing.

Thibodeaux then ran through the Chamber’s year, month by month.

• In January 2016, the Chamber welcomed a new Leadership EXCEL class and held its annual farmers’ appreciation dinner. Thibodeaux also explained that she was elected to serve on the inaugural Louisiana Association of Business and Industry’s Emerging Leaders Council.

• In February, the chamber held its annual Legislators’ Breakfast, the Career EXPO and the Crowley Chief of Police Candidates Forum (ahead of the special election).

• In March, the parish saw the Freeland site become certified, proving it to be shovel-ready for interested parties. Thibodeaux explained that the site has been offered up to the state as potential sites in RFP bids. The parish is hopeful one of these projects land in Acadia.

• In April, the Chamber held its annual golf tournament, one of its most relaxed social events, and was a part of Acadiana Day at the State Capitol and the governor’s economic development conference.

• In May, the Chamber was happy to take its turn in saying “thank you” to those who continue to give back to the community through its annual banquet.

• In June, the Louisiana Small Business Development Center began making monthly trips to Crowley to offer, by appointment, advice and information to small business owners, both current and hopeful. Thibodeaux explained that through those appointments several businesses have seen their dreams become reality with actual brick and mortar businesses.

• In July, the Chamber held its strategic planning meeting, which completely flew out the window within weeks.

• In August, the historic flood basically pushed businesses and the Chamber back several weeks as the region worked to rebuild after the flood. The Chamber offered resources to area businesses through collaborations with the Small Business Association and the Federal Emergency Management Agency.

• In September, things began returning to normal with a Network@Noon event and attendance at the ABiz Top 50 and the Louisiana Association of Chamber of Commerce Executives conference.

• In October, the Chamber held its annual Gumbo Cook-Off and welcomed back alumni from past Leadership EXCEL classes for a special reunion and social, an idea that has been tossed around for years.

• In November, it was announced that an Economic Development Association grant could mean big things for Acadiana and Acadia with the Accelerate Acadiana Program. Through research, the area will look to help see the creation of businesses to answer the big needs and compliment the already existing businesses in the area. Those created businesses will be put through a rigorous and accelerated program with many tools, training and more to help foster success.

• In December, the Chamber held its annual Ribbons and Rice and Holiday Business After Hours. Thibodeaux explained that close to 300 people attended the holiday after hours event and described the importance of celebrating and supporting local businesses through programs such as Ribbons and Rice, and year-round.

As for what’s next in 2017, Thibodeaux explained that an external regional re-branding effort is ongoing and that in several months the Crowley Chamber’s website will be getting a refresher. Also on the horizon are, of course, legislative changes in District 42 and the finishing of the Interstate 10 Service Road this year, weather permitting.